Parkington Lane is a minor character in the movie National Treasure.

Parkington Lane was born in 1688 and sometime during his life became a Freemason. He was a third-degree master mason of the Blue Lodge when he died in 1744. After his death he was buried inside the Trinity Church and was made part of the clue to the Templar Treasure. A passageway lead from his crypt to secret underground staircase leading to the treasure, and his name was used as a clue behind the Declaration of Independence. 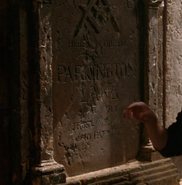