Thomas Jefferson Gates is the ancestor of Patrick Henry Gates and his son Benjamin Franklin Gates.

In 1832, Thomas Gates worked as a stable boy of Charles Carroll. Charles woke Thomas up in the middle of a stormy night to drive him to the White House to see Andrew Jackson. However the president wasn't there that night. As Charles was dying he had no other choice but to tell a secret of the Templar Treasure to Thomas Gates. The only clue Charles had of the treasure's whereabouts was a note saying "The Secret lies with Charlotte."

14th April, 1865, while Thomas Gates was working in Harbach Tavern in Washington, D.C., he was approached by John Wilkes Booth and Michael O'Laughlen seeking to decipher a Playfair Cipher. Using the clue "The debt that all men pay", Thomas deciphered the code, but once he saw Michael O'Laughlen was wearing the badge of Knights of the Golden Circle, he burned the solution, and was shot for it. Thomas Gates dies repeating the phrase "The debt that all men pay" to his son Charles Gates who saw it all happen. 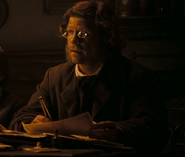 Thomas Gates in 1865
Community content is available under CC-BY-SA unless otherwise noted.
Advertisement